Some years ago I posted about the comments made by Sir Edward Leigh in regard to the conduct of major projects when he retired as Chairman of the UK Parliaments Public Accounts Committee.

It would seem that the comments made then are still pertinent today, perhaps even more so. My memory was jogged by the recent report from the Taxpayers Union of the apparent massive blowout in a new IRD computer system to handle changes to child support. Then I read the articles in The Dominion Post this morning regarding the transformation project underway at IRD.

The objectives of the changes are not unreasonable, what concerns me is the scale and potential complexity of the project.  In particular this comes at a time when IRD are looking at a massive project to replace existing and aged systems.

I intend to look at the issues around major projects in a series of posts over the next few weeks. My intent is to start with what appears at first sight to be a major blow-out, but on review may come up with a number of different questions requiring answer.

As background I have linked to Sir Edward’s letter, Edward_Leigh_Letter_28_March_2010 and to the IRD report on the child support system  Taxation Annual Rates for 201516 Research and Development and Remedial Matters Bill. In addition there is a link as well to a relevant McKinsey Quarterly article,  Delivering large-scale IT projects on time on budget and on value.

A little bit of whimsy

We Have Met the Enemy – He is Us

This was the title of my presentation at the #ITx2014 conference yesterday.

I have embedded the slideshow. In the next few days I will try and put up a version with an audio commentary reflecting what I said on the day.

This conference will soon be upon us. I have been fortunate enough to have a paper selected for presentation.

The programme is here and my offering is here.

You can register here

Established in 2014, ITx is three conferences in one; combining the successful IITP and CITRENZ national conferences with the re-launch of the Computer Science Association’s conference; establishing the broadest and largest non-vendor general IT conference in New Zealand.

ITx focuses on innovation, technology and education and brings IT professionals, decision-makers, leaders and academics together under one roof. This is a conference like no other: where industry, academia and government come together to network, learn and engage.

ITx will run every second year in either Auckland, Wellington or Christchurch.

The Institute of IT Professionals NZ (IITP) is the professional body of the IT sector and is the largest IT representative body in New Zealand. IITP has run conferences for almost 50 years, although there was a large hiatus prior to the 2010 50th Anniversary Conference. IITP2013 was held in Tauranga and attracted hundreds of IT professionals and thought leaders.

Computer and Information Technology Research and Education New Zealand (CITRENZ) is the representative body for the IT departments of New Zealand’s Institute of Technology / Polytechnic sector. CITRENZ has been running successful annual conferences for 27 years.

Computer Science Association of New Zealand (CSANZ) is the forum for the University Computer Science community. CSANZ has been active for many years and 2014 will see the return of the popular CSANZ conference as part of ITx.

I am putting together a couple of papers for possible presentation/publication sometime in the future.

We have met the enemy – it is us
Outline of proposed paper
Why do so many projects fail? Why despite the conferences, papers and books do we still see such a high proportion of failed ICT projects? Why are so many so quick to allocate blame to the project managers?
This paper looks at this issue from the perspective of a practitioner with several decades of experience in projects, project assessment and managing professional services. The core theme of the paper is that the root cause of much project failure is human nature; coupled with a signal failure even today by many who should know better to understand that technology is merely an enabler it is not a substitute for understanding and resolving the actual problem.
The paper will consider why failures continue to occur, the place of project methodologies and why we see projects subject to ‘strong’ governance still failing. The paper will draw upon the experience of the author and make reference to situations actually encountered across the author’s lengthy career. Consideration will be given to the viewpoints of executive management, operational managers, project personnel, vendors and consultants.
The author intends to take a provocative stance in his comments, especially as regards the all too common tendency to blame project managers for the problems, when in his opinion that is far too simplistic. Furthermore, he proposes to question the current fad for governance which all too often confuses protocol and process with the intent of governance which is ‘informed decision making’.
In summation the author intends to offer some suggestions as to commonsense steps which might be taken to reduce the incidence of failure.

Extinguishing scrub fires before they spark conflagrations
Some Thoughts on Portfolio Management
Outline of proposed paper
More and more organisations are finding themselves in the position of having portfolios of projects running. Some projects run well, others do not. Despite the money which has been spent on management systems we still find that the rate of success is poor and that in many cases executives and managers are surprised when programmes and projects ‘go off the rails’ with the velocity in many cases of a runaway locomotive.

The author intends to draw on his extensive experience with two major global organisations to highlight approaches to portfolio management which he has found successful both in identifying at an early stage the possibility of problems and where necessary mitigating the issues arising. The paper looks at these matters from a practical practitioners perspective not a theoretical one. It is hoped that the lessons learned, especially from mistakes made, will enable others to avoid some pitfalls in the future.

Areas considered include the question of risk/ benefit, cessation versus continuation and whether the perspective is different if the programme/ project is in house or external.

Regard will be had as to possible organisational approaches that may or may not offer benefits, including the role of Programme Offices.
In summation the intent is to look at Portfolio Management through the lens of a pragmatic practitioner and to offer some observations on possible approaches to obviate issues, ideally before they become problems.

The thrust of these two papers will be to take a practical experience based look at some of the issues in these two areas. It would greatly assist if anybody with views on the areas outlined would be kind enough to share their thoughts with me. I am happy to acknowledge such input in the paper. Furthermore if anybody would like to act as a reviewer please let me know, as another brain is always useful.

Went to the IITP Breakfast at The Wellesley this morning to hear Revenue Minister Todd McClay talk about the reasons behind the IRD Transformation project. 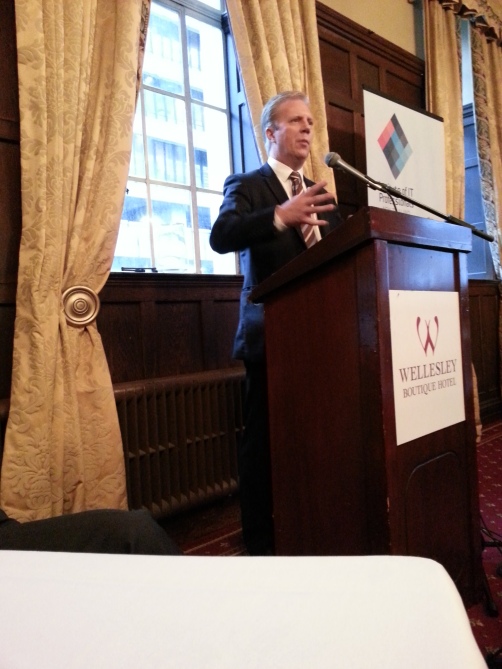 An informative presentation on some of the thinking behind the major programme IRD are proposing.

It will be interesting to see if the words translate into execution once the programme moves into later phases.

Yesterday I posted an item on 10 Things Great Project Managers Do. This post popped up on Facebook, as do my other posts, and a friend and former colleague Andy Cawston responded. We entered into a brief discussion as to how various human factors impact on projects.

Andy had made the observation that the list did not include Risk Management, to which I responded:-

Sure and in one sense all of the 10 are about Risk Management, with a focus on the people aspects, often seen as the ‘soft options’, yet in fact people are in many ways the hard options and in my view looking back over several decades ‘people’ are in fact one of the root causes of project failure. Indeed depending on the criteria being used to assess failure one might argue that ‘people’ are the primary cause of project failure and that successful project management is more about people management than anything else. At which point all sorts of people emerge from the woodwork to decry the proposition.

Andy then went on to expound an interesting concept:-

I’d be inclined to support that proposition. To my experience the primary causes of project failure tend to be people-related. For example, scope creep = people wanting too much, too soon, for too little. <— that’s Greed (Avarice), in a nutshell.

You could take each of the 7 Deadly Sins and similarly map them against the causes of project failure. All of them.

Wrath, sloth, pride, lust, envy, and gluttony could each similarly be mapped against primary causes of project failure, and as such could be managed as project risks.

I can recall one project in particular where Sloth was the primary cause of a project nearly failing. I was assigned to drag the project back, and we ended up delivering properly. It was hard work!

I can recall another project where Pride and Envy played a huge part in the bid process. Our team had been selected to develop a Partnership with the client. Our PM resented the presence of an external consultant driving the project, fought him tooth-and-nail, and we nearly ended up getting booted out of the account. Only a Mutiny by our team against the PM saved us…

Indeed the more I think about it, the situations we find ourselves in so often on projects do mirror the 7 Deadly Sins. Further, I think that more and more I am coming to the view that people are the primary cause of project failure, which goes a long way to explaining why we continue to see project failures year after year with causes of failure the same or similar to those encountered decades ago.

What do others think?

I found this video at McKinsey & Co, it discusses how consumer experiences are impacting expectations of service delivery.

I came across this slideshow on 10 Things Great Project Managers Do today whilst browsing some online newsletters I subscribe to.

Whilst they may seem a little motherhood and apple pie to some,  it is when the basics are executed right that we get success. All too often we neglect the basics at our peril. There is a reason that the basics are called the basics.; it is that they are the building blocks for success.

One that resonated with me particularly was Number 10

The reason being that all too often in the past I have had occasion to ignore this basic. When I have it has often not turned out like I would have wished. Being a hard charger as the Americans say, is all very well, but you need to pace the charging. That knowledge often comes only with experience and after learning why the basic is a basic and not a namby pamby HR idea.

Went along to an alumni function at PwC on The Terrace this evening. Caught up with some former colleagues, including one who had just recently walked the Camino de Santiago. Sounded most intriguing.

The highpoint of the function was an interesting address by Therese Walsh – ICC World Cup NZ Chief. It sounds as if NZ and Wellington will have an event to be proud of, plus one that will be of economic benefit.